Keep Up The Pressure On The Trade Union Bill 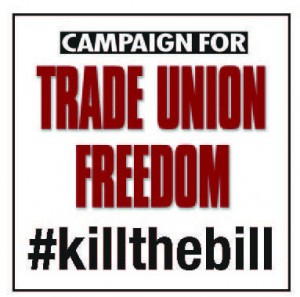 The Government was dealt a major blow this week on the Trade Union Bill when they had to drop the proposed ban on Check Off in the public sector.

The Government have now been defeated three times over on key parts of the Bill.

It‚Äôs clear they are on the back foot and we now have to keep the pressure up.

The Bill now heads back to the Commons, and we need MPs to listen to the House Of Lord, and vote to keep the Lords amendments in place.

You can do this by writing to your local paper by following this link.

Even with these amendments this is still a bad Bill that undermines working people‚Äôs voices at work and in politics – but without these changes it‚Äôs even worse.

Before the Bill was debated in the House of Lords, thousands of campaigners across the country wrote to their local papers about this attack on democracy.

Could you take a few minutes to write to your local paper by using this link.

You just need to fill in the information required – there is a standard letter which will be automatically sent to newspapers in your area.

It is time to tell readers about the Trade Union Bill and to urge your MP to support the amendments when the Bill comes back to the House of Commons?

It‚Äôs only with the voices of campaigners like you, signing petitions, campaigning on social media and writing to your local papers that we can continue to oppose this attack on unions.