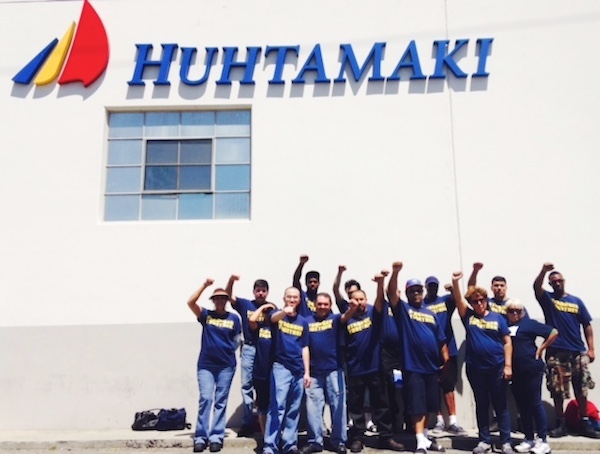 Following on from our news item on April 24th, which reported that a Finland based packaging company had been found to have violated U.S. employment laws, the United Steelworkers have reported that Huhtamaki paid almost half a million dollars in 2014 to an anti-union consulting firm to try to prevent its workers in the U.S.A. from organizing at its plant in Commerce, California and several other U.S. locations.

According to aÂ reportÂ filed with the U.S. Department of Labor, Huhtamaki made payments totaling $428,421 toÂ Cruz & Associates,Â a well-known anti-union consulting firm.

Advising employers on how to avoid unions and block attempts by workers to improve their livelihoods is now aÂ lucrative legal fieldÂ in the U.S.

Workers at the Commerce plantÂ make as little as $9.00 per hour. Levi Ross, a machine operator, was shocked to hear that the company had spent hundreds of thousands of dollars to keep them from organizing. â€śHuhtamaki should use these resources to pay us fairly, so we can afford basic costs like childcare.â€ť Ross is a member of the elected worker committee.

On its website, the firm advertises its skill in â€śUnion Avoidance-Preserving a Union Free Work Placeâ€ť:

Cruz & Associates has the resources, skills and experience to produce winning results in the face of virtually any union challenge. We have developed proven best practices for responding to the most sophisticated tactics of modern labor organizers.

According to its reports to the Department of Labor, Cruz & Associates assisted Huhtamaki at multiple sites across the country, including Commerce, California, and other plants in Ohio, Indiana and Kentucky.

In Commerce, workers supported by the United Steelworkers Union, which represents employees at four other Huhtamaki plants in the U.S., have demanded that the company meet with their elected representatives to discuss workplace issues including an arbitrary disciplinary system and excessive temperatures in the plant.Â  The company has refused to meet with the workers for nearly a year.

Workers at the Commerce site report that they were required to attend meetings where a â€śconsultantâ€ť from Cruz & Associates, Eduardo Padilla, attempted to persuade them not to support the union.Â  Padilla and other consultants spent several months in the plant talking to employees.

According to charges filed with the U.S. National Labor Relations Board, Huhtamaki has retaliated against union supporters by changing their work schedules and job duties and limiting their paid time off.

Huhtamakiâ€™sÂ Corporate Code of ConductÂ states that: â€śHuhtamaki supports the International Labor Organization (ILO) Principles promoting equal opportunities and including fundamental human rights for all employees, fair compensation, freedom of association and the right to bargain collectively in a lawful and peaceful manner”.