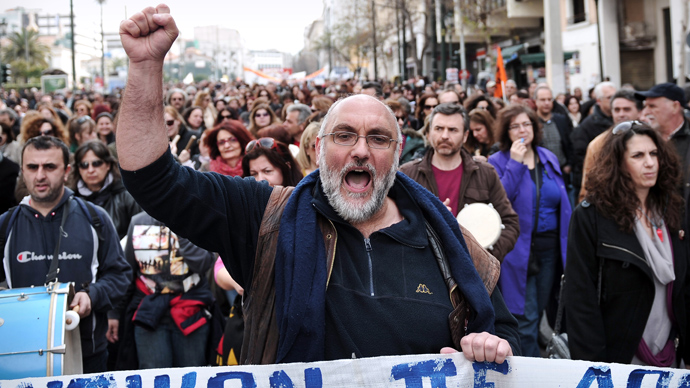 Teachers and students protesting in Athens at weekend.

From City A. M, Â May 13th, Submitted by Adrian Weir

Greece has threatened high school teachers with arrest if they go ahead with a nationwide strike that would disrupt university entrance exams that start this week, the official government gazette said.

It is the third time this year that Prime Minister Antonis Samarasâ€™s government has invoked emergency law to force strikers back to work to try to show foreign lenders who bailed out Greece that the country is sticking to unpopular reforms.

The conservative-led coalition wants state high school teachers to put in two more hours of work each week and transfer 4,000 of them to remote parts of Greece in order to plug staffing gaps.

The union representing the teachers, OLME, says that under the plan, about 10,000 part-time teachers could be dismissed once their temporary contracts expire.

It has called for a 24-hour strike when exams start on May 17th and rolling strikes the following week.

Under Greek law, the government can forcibly mobilise workers in the case of civil disorder, natural disasters or health risks to the public.

The coalition, in power since last June, has made increasing use of these powers to deal with frequent anti-austerity strikes, breaking week-long walkouts earlier this year by seamen that led to food shortages on islands and metro workers that disrupted transport in the capital.

OLME plans to hold a rally in central Athens today and has called on the main public and private sector unions, representing about half the country’s workforce, to stage a general strike in solidarity on May 17th.

Teachers will be served a civil mobilisation order to go to work on that day or face arrest.

Education Minister Constantine Arvanitopoulos said banning the strike was necessary because students had a sacred right to sit exams without disruption.

The opposition called on the government to withdraw the law and open dialogue with the teachers after the exams. â€śThese threats by the prime minister and his government are directly against the overwhelming majority of workers and society,â€ť the Syriza party, which opposes the countryâ€™s bailout, said in a statement.

Click here to read the updated story in the Belfast Telegraph.