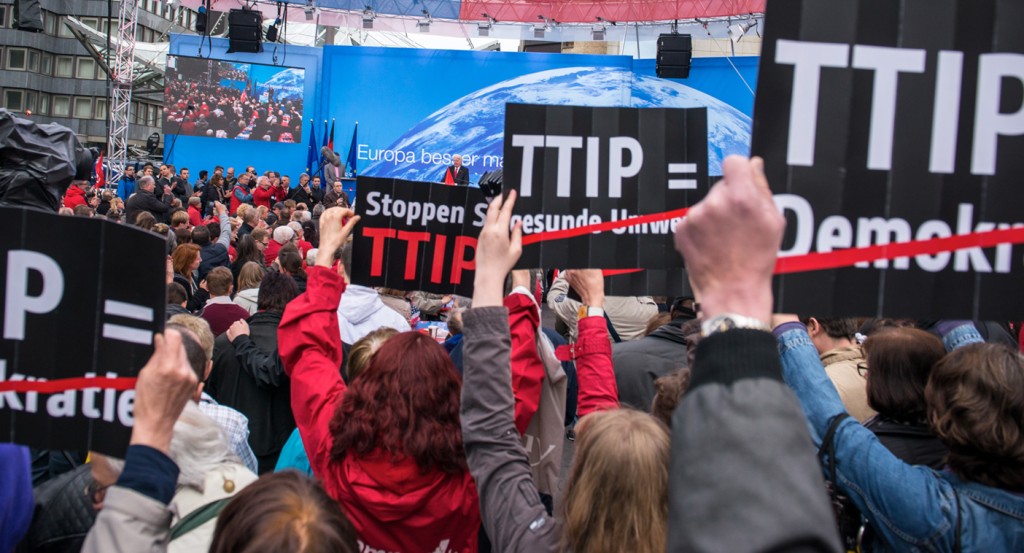 The European Commission announcedô on 16th September that the infamous ISDS arbitration arrangement for resolving claims by corporations against states under TTIP will be substituted by an Investment Court System (ICS) on which 3 judges will sit, drawn from a panel of 15 established by the EU and the US.

The judges will not be allowed to act as lawyers (e.g. preparing the investorãs claims) in other ICS cases. There is also to be a bilateral appellate body consisting of 6 judges. The judges are to have qualifications comparable to those who work for the WTO Appellate Body or the International Court of Justice.

The proposal requires that investors (i.e. multi-national corporations) will have to withdraw from any domestic proceedings they have started before submitting a claim to the ICS and will not be allowed to revert to a domestic court after losing the ICS case. So the prohibition is only against using ICS and national courts simultaneously; there will be no bar to taking a case to ICS after final judgment in the national court. So-called ãtreaty shoppingã will be forbidden under the new rules, i.e. the practice of corporations choosing the most favourable applicable free trade agreement in order to sue States.

The proposal to replace the infamous ISDS with an ICS addresses a number of concerns but it totally fails to deal with the heart of the problem. The fundamental issue is the grotesque concept of ãinvestor protectionã, i.e. a legal right enjoyed only by investors (i.e. multinational corporations) against, for example, lack of ãfair and equitable treatmentã or ãexpropriationã, a right which is enforceable by bringing a claim for loss of hoped-for profit against a State in an ISDS or (the new proposed) ICS court.

ãInvestor protectionã is a provision in all the free trade agreements. It is a right over and above the law of the States to which the agreements apply. It is a right which no citizen of those States enjoys. So, in TTIP, the citizens of Europe will only have the benefit of ordinary laws (of their own States, of the EU and of the European Convention on Human Rights). In contrast, the corporations will have the benefit of all those existing laws plus their special right to ãinvestor protectionã.

Whereas citizens can sue in national and European courts, they are absolutely prohibited from bringing a claim in an ISDS or ICS court. Indeed, they have no right to be heard in such a court, even though their interests may be at issue. In contrast, the corporations can sue in national and European courts and, if they do not like the outcome, can then take their claim to their own special court, the ISDS or ICS court. Most importantly, the ISDS or ICS courts have the power to disregard contrary judgments of national courts, of the Court of Justice of the EU and of the European Court of Human Rights.

It should also be noted that this privilege of ãinvestor protectionã and a special court in which to enforce it, is denied not merely to the citizens of the States which ratify the free trade agreement, it is denied to those States themselves! So by ratifying such an agreement a State creates a right for corporations to sue it whilst denying a reciprocal right for itself and its citizens.

Finally, the substitution of ICS for ISDS only applies to TTIP; it does not apply to CETA, the EU/South Korea agreement or any of the free trade agreements currently being negotiated by the EU.

The ratification of agreements contained such provisions for ãinvestor protectionã is surely a betrayal of the interests of the citizens of Europe.

The pursuit of these lop-sided agreements can only fuel the campaign in the UK to leave the EU.