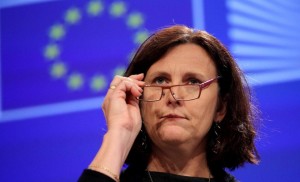 Not content with having to handle the controversial TTIP and CETA trade negotiations which are facing controversy and opposition from trade unions and environmental groups across the EU, EU Trade Commissioner Cecilia MalmstrĆ¶m, announced negotiations are to begin with Japan. Japan is seeking to get an agreement later this year – but that seems unlikely.

Below we produce the edited highlights of her speech was was heavy on the benefits to the automotive sector, finance and lowering tariffs. There was no mention of employment rights, ILO standards etc.

Coming at a time when the USA is in negotiations with 12 Pacific Rim countries on their TPP deal another front has been opened in the fight for decent global employment rights.

In a speech in Tokyo this week Ms. MalmstrĆ¶mĀ to her audience : “This deal has enormous potential for both sides.Ā Japan and the European Union are both facing serious economic challenges.

We want to put our people to work today and we want to secure the prosperity of our societies forĀ the coming decades. To do both of those things, we need more growth.Ā We are both now using the widest possible range of tools to try deliver that growth.

Here in Japan, Prime Minister Abe’s three arrows are aimed precisely at a more prosperous future.Ā In the European Union, we are also innovating in fiscal policy, monetary policy and structural reformĀ to produce the results that our people need. And we have the added challenge of coordinating 28Ā different archers, I might add!

For both sides, this trade agreement can be part of that process of economic renewal.Ā More open trade will boost demand for our exports on both sides, whether for our excellent carsĀ and machinery, or for cosmetics, financial services or food.Ā And the scale of that effect will be huge because the European Union and Japan are respectively theĀ largest and the fourth largest economies in the world. We are combining a great deal of demand, soĀ this deal would give a significant boost to both our economies.Ā More open trade can also help make us more competitive. It will lower prices and widen choice forĀ consumers, and for companies like yours. In a world of global value chains, you need access to theĀ best imported parts, components or vital services if you want to support jobs here in Japan. TheĀ same is true for European firms.

Finally, more open trade between Europe and Japan will also drive our investment relationship āĀ investment that both sides need.Ā We know all of this can work because the EU and Japan already have a deep and solid economicĀ relationship between us. Japan accounts for over 3% of all EU trade and is our second largest AsianĀ trading partner. The EU makes up 10% of Japan’s trade and is its third most important tradingĀ partner overall.

Our trade is also relatively balanced. While in the past the EU had a significant trade deficit withĀ Japan that has fallen dramatically to slightly over ā¬ 1 billion last year.Ā And we have a close investment relationship. Japan is a major investor in the EU, and innovativeĀ Japanese companies have not only created jobs in Europe, but become an integral part of ourĀ economic environment.

Nonetheless there is real untapped potential for closer ties. The fact that Europeans have notĀ invested as much in Japan as we have elsewhere underscores that potential.Ā In short there is a huge amount to be gained from an agreement like this.Ā

Japan is also arguing for a quick result, in fact for a deal by the end of this year. Again, we in EuropeĀ share the enthusiasm that such an objective would represent.

However, we also believe that if this deal is worth doing, it’s worth doing right.Ā We have to be ambitious on the substance as well as on the timing.

If we can create a good product quickly, we should do it and spare no effort. If it takes a bit longerĀ to create that good product, we should take that time.

This is also something that I have discussed with several ministers during my days here in Tokyo,Ā and I will continue those talks this afternoon.

What does that mean in practice? Four things.

First, tariffs. These are mostly low. But they are high on food, drink and agricultural products. AndĀ that means big opportunities. So we should be aiming to get rid of tariffs on both sides, including onĀ food and agriculture as well as cars. Of course, we must respect each other’s core sensitivities. ButĀ we in Europe can’t accept a deal that’s inferior to what we have negotiated with countries likeĀ Canada and Korea.

Second, an ambitious deal also needs to cover the climate for investment. We need strong tools toĀ boost investment flows in both directions. And to bring the relationship more into balance.

Third, an ambitious agreement means tackling public procurement. We already have a goodĀ beginning. Because we’ve already reached an agreement on non-discriminatory and transparentĀ access to procurement by Japan’s major railway companies.

That deal will allow European companies to compete better for business in Japan. It will also allowĀ Japan’s train operators have access to excellent technologies at the best prices. And that means theĀ passengers will ultimately be the winners.

This is exactly the kind of benefit that will come from showing similar ambition all across publicĀ tenders, whether at the level of cities and towns or central government. Open public procurementĀ markets are of benefit to all. That’s why we in Europe already have one of the most open systems inĀ the world.

Finally, and perhaps most importantly, we need an agreement that makes European and JapaneseĀ regulation more compatible. I have heard many examples and stories from industry of very similar,Ā but slightly different legislation. Such differences can be especially difficult for small companies, ifĀ you have to conduct almost identical testing twice, for example.

Making regulation more compatible is essential if we want to see real gains from trade. RegulatoryĀ cooperation is the future of trade policy, which is where the EU and Japan both need to be.

Let me be clear, regulatory cooperation does not mean undermining the rules that protectĀ consumers or the environment. People in Europe and Japan need to be sure that the products theyĀ use are safe, effective, and environmentally friendly.

But it does mean trying to remove unnecessary technical differences between our systems, on theĀ basis of international standards, in order to boost growth, and to save time, money and energy.

I was delighted to read in Keidanren’s paper of this March that you strongly support this objective.

And I share your view that we should shift to a higher gear. These negotiations are an excellentĀ opportunity to do that.

We’re already making progress. For instance in the car sector, the EU and Japan recently agreed onĀ common standard for noise for passenger cars. For medical devices, the rules governing theĀ inspection of manufacturing sites are now the same in the EU and Japan. That shows the potential ofĀ this work.

There are opportunities for gains like that in many other sectors too, like food, financial services,Ā medicines and chemicals, electrical equipment and telecommunications to name just a few.

Across this whole range of issues, we should tackle existing barriers and also set up a mechanismĀ that will enable us to address future ones.

Ambition here is particularly important because in some cases, the benefits will go beyond ourĀ bilateral relationship. Take the car business for example.

The EU and Japan follow international standards set in the United Nations Economic Commission forĀ Europe. As a result our rules are similar, and we can therefore set an example that the rest of theĀ world, particularly developing economies, can follow.

There are still differences that raise the cost of trade between our economies. A good deal willĀ reduce them, and will also help us develop new international standards that can eventually beĀ applied in other markets. That means we can make a contribution to an open global market for ourĀ products through this bilateral deal. That would be a major achievement in itself. And it would bringĀ great benefits to our industries”.