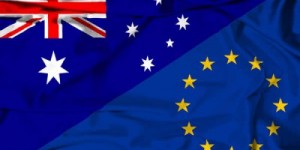 The news that Australia and the EU will begin negotiations on a free trade agreementÂ  in 2017 will sound alarm bells ringing within the EU and Aussie trade union movements.

It seems like the EU is determind to press ahead with trade deals whereevr they may find them. Not content with CETA (with Canada), TTIP (with the USA) – both of which face significant trade union opposition we aleady have on the stocks a possible deal with Mexico and now a deal with Australia.

Malcolm Turnbull the Australian PM has met EU officials to map out aÂ  timeline for the negotiation of the proposed FTA with the EU, and was told it would take time to do the requisite groundwork with EU member states.

The Australian prime minister secured the backing of Angela Merkel the German chancellor, for Australia to negotiate a free trade agreement with Europe during his one-day visit to the chancellery in Berlin last Friday.

“This is a very important day as the European Union begins its internal process of framing the negotiating position it will take to the discussions with Australia from early 2017 … towards a European-Australian free trade agreement,” Mr Turnbull has said.

The EU’s Jean Claude Juncker told reporters after the meeting the European Union was undertaking an impact assessment ahead of a decision to enter into formal negotiations. He said the aim was to finalise the negotiation “mandate” in 2017, which is required from EU countries before the talks can start.

The EU accounts for about a quarter of global GDP, covering 28 countries and more than 500 million people.

As with the other trade deals we can expect a best a weak employment rights chapter alongside Investror State Protection clauses which back the interests of coporations.

Interestingly, Australia has just pushed through a free trade agreement with China in which the Australian Labor Party won concessions on employment issues.