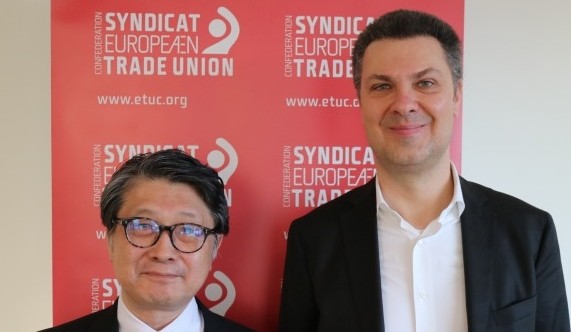 Japan is the EUŌĆÖs second biggest trading partner in Asia, and together the two blocs account for more than one-third of world GDP, so the stakes are high.

Trade unions are also demanding greater transparency and disclosure of documents. ŌĆ£Negotiators must conduct their work as openly as possible, in order to secure public support for an eventual deal. We need a mechanism for consulting the social partners on the progress of the talks,ŌĆØ said Naoto Ohmi.

ŌĆ£Essential public services must be explicitly excluded from the agreement, to protect them from privatisation by profit-seekers and the erosion of social, environmental and health standards in the countries concerned,ŌĆØ added ETUC General Secretary Luca Visentini.

ŌĆ£The ETUC also rejects the setting up of Investor State Dispute Settlement mechanisms (ISDS), which give foreign private investors special privileges in relation to governments. Standard-setting must remain in the hands of democratically elected lawmakers.ŌĆØ

EU-Japan Free Trade Agreement negotiations were launched on 25 March 2013. The 15th round of talks starts on Monday 29th February.