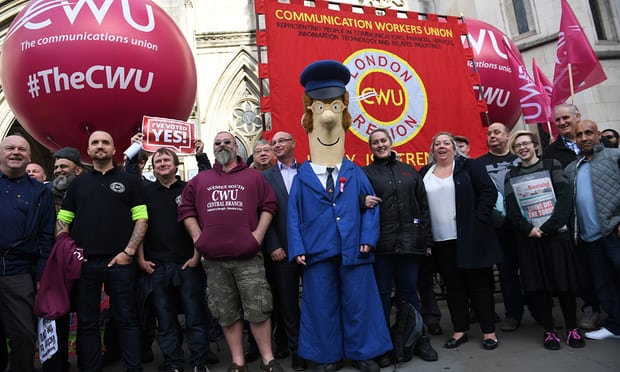 Following the decision by the High Court to grant an injunction against the CWU stopping strike action – despite members returining a massive vote in favour of action – in both the turnout and a yes vote – the CWU issued the following statement.

“Defiant cheers greeted CWU leaders this afternoon (October 12th) as they vowed to fight on despite a legal ruling against us at the Royal Court of Justice.

Royal Mail‚Äôs legal bid for an injunction preventing the union from striking next week was granted by the judge, Justice Supperstone, in a verdict, which our general secretary Dave Ward said would make members ‚Äúdisappointed and angry.‚Äù

The company had ‚Äúacted in bad faith,‚Äù said Dave, adding that the injunction granted had set a formal timetable for negotiations and that, unless the company shifted it‚Äôs position ‚Äúsignificantly and quickly‚Äù they would soon have to face ‚Äúthe reality of industrial action.‚Äù

Deputy general secretary Terry Pullinger accused the business of ‚Äútrying to stop the democratic rights of our members.

And in a stern warning to the people at the top of Royal Mail, the DGSP said that unless the renewed negotiations achieved a fair deal, ‚Äúthe industrial action will be back on.‚Äù

* the union‚Äôs national leadership will meet as soon as possible to discuss the next steps forward.

*For the avoidance of doubt the strike action planned for 19/20 October has been withdrawn.

The Royal Mail argued in court that the Communication Workers‚Äô Union had fallen foul of the law by not going through ‘dispute resolution’ procedures agreed at the time of privatisation. Union reps denied this claim.

Campaign for Trade Union Freedom chairman Tony Burke told the Morning Star: “This is unbelievable given the size of the vote in favour and a turnout that¬Ý passed the 50 per cent mark by miles. It’s ludicrous that the High Court has granted the injunction.”

CTUF will be posting/tweeting updates and news on the decision by the High Court and information from the CWU.

Please support the CWU in their fight against this decision which is designed to stop a legitimate dispute overwhelmingly supported by members of the union.