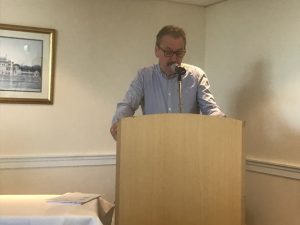 The election of President Trump has meant that TTIP has gone in cold storage, but not unfortunately killed off.

The main focus in the US is to renegotiate NAFTA with Mexico and Canada although how you can have a free trade agreement with a country that at the same time you‚Äôre seeking to quarantine behind a massive wall is beyond me.

However, the quislings in the European Commission and the Tory Government ‚Äì at least before last month‚Äôs General Election – seem more than happy to sign away labour rights in pursuit of free trade deals with just about anyone.

Before the Election the Government thought nothing of leaving the jurisdiction of European Court of Justice but waxed lyrical about signing up for ISDS.

ISDS ‚Äì Investor State Dispute Settlement, special quaisi courts established only for the benefit of multinational corporations, allowing the multinationals to sue governments that dare to legislate in the interests of workers an against the corporations.

So toxic has ISDS become that the European Commission has proposed two new measures to defuse the widespread anger.

Firstly, in the Canada treaty ‚Äì CETA ‚Äì ISDS has been rebranded as ICS the Investor Court System but in effect it‚Äôs the same ‚Äì special quasi-courts for the use and benefit of multi-national capital.

Secondly, as a way of taking out the wave recurrent anger with each new treaty the Commission is proposing to put the so-called court on a permanent footing ‚Äì the Multilateral Investment Court ‚Äì that would cover all future treaties.

I‚Äôm pleased to advise Conference that the TUC has already taken a lead and dismissed the Multilateral Investment Court and argued what that should be improved in free trade deals is the labour rights chapters – preventing a global race to the bottom.

None of the new generation treaties with Korea, Canada and now Japan have enforceable labour rights although the multinationals have their own special courts.

Our opposition to these treaties is not just to defend some hard to define rights for workers there is also a jobs and workers‚Äô living standards to be considered.

Research by the US university ‚Äì Tufts ‚Äì shows that in Canada there will be a shift of national income from labour to capital of 1.75%.

For all of the CETA signatory countries ‚Äì which will include us as the treaty will probably be ratified before Brexit ‚Äì Tufts estimate there will be a quarter of a million job loses stemming from treaty implementation.

So we call on the Confed to: