UPDATED: Clegg Deals Another Blow For ‘Shares For Rights Scheme’ 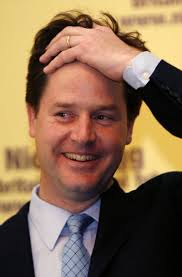 In yet another blow for George Osborne’s failing ‘flagship policy’ of offering workers shares in exchange for giving up employment rights Nick Clegg, the Deputy Prime Minister has distanced himself from the Coalition government’s ill fated scheme which was introduced and piloted through Parliament by fellow Lib-Dems Vince Cable and Jo SwinsonÂ in 2013, indeed Ms. Swinson commented at the time:Â “I have every expectation that when we look back at 2013 we will recognise it as having laid the foundations for a thriving and growing employee ownership sector in the UK.” (Jo Swinson, Minister for Employment Relations and Consumer Affairs).

Clegg described Osborne’s scheme as a wasteful “pet project,”. He said the Lib-Dems would have chosen to increase the tax-free allowance and give those on low incomes an extra Â£140 per year instead.

Nine months on, no wonder that Nick Clegg is steering clear – Â figures suggest that the scheme is attracting minimal interest for employers and workers, despite Government spin last year that it was still “early days’.

When George Osborne announced the scheme it was roundly criticised by unions, employers, employment lawyers and tax experts (some of whom described it as a tax avoidance scheme).

A recent freedom of information request to the Department for Business, Innovation and Skills revealed that only nineteen inquiries have been made about the scheme since July last year.