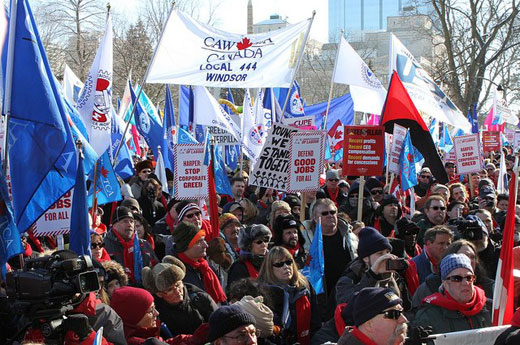 The right-wing Conservative government of Canadian Prime Minister Stephen Harper has launched yet another assault on working people in Canada with legislation that, if passed, will make it harder to organise trade unions and easier to decertify established ones.

Conservative Member of Parliament Blaine Calkins has introduced Bill C-525 that, under the guise of giving workers a choice of whether to join a union, will remove the automatic card-check certification in the federally-regulated sector (telecommunications, banking, transportation, etc.).

For decades, union certification under the Canada Labor Code has allowed a majority (50 percent +1) of the members of a workforce to sign membership cards and pay $5 to certify a union. In its place, Bill C-525 will require that 45 percent of a bargaining unit sign union cards followed by a Labor Board-supervised secret-ballot vote. More than 50 percent of the bargaining unit must vote in favor of establishing a union, instead of 50 percent of those who vote. Those who don’t vote or could not vote are counted as negative votes. No provincial labor code has this type of provision.

“There are good reasons why the card-check model has been practiced in federally regulated sectors,” according to Dave Coles, president of the Communications, Energy and Paperworkers’ Union of Canada. 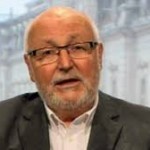 Dave Coles of the CEP

“For one,” he said, “it can be difficult to organize votes for bargaining units spread across the country and transport sector employees are regularly in different places. More importantly, the card-check process protects workers from intimidation. It’s widely understood – confirmed by many academic studies – that secret-ballot workplace votes reduce union certification as they give employers an opportunity to intimidate employees through compulsory anti-union meetings and implicit threats of job loss.”

Bill C-525 will also allow a minority to constantly threaten a union with decertification. If 45 percent of a union bargaining unit asks for decertification, a Labor Board supervised vote will be held. More than 50 percent of the bargaining unit must vote in favor of the union as its continued bargaining unit, instead of a majority of those voting. Those who don’t want to vote or could not vote are effectively deemed to have voted against unionization.

“Bill C-525 needs to be seen in the context of the government’s low-wage strategy. It’s the latest step in the Conservatives’ bid to reduce workers’ power to the benefit of the business class”, asserted Cole.

Ken Lewenza of the CAW

The president of the Canadian Auto Workers, Ken Lewenza, pointed out, “If this same distorted standard of democracy were applied to federal Members of Parliament, there would not be a single Conservative member sitting in the House of Commons today. There is no MP in Canada who was elected by over 50 percent of the voting-age adults in their riding. Why on earth should this test apply to unions, but not MPs?”

Bill C-525 is currently being scrutinised by parliamentary committees and then will be voted on later this fall. The Harper Conservative government holds a majority of seats in Parliament and has enough votes to pass the bill.

Critics charge that Merit Canada, an employer lobby group which is pushing to end unionisation in the construction field, is behind Bill C-525. Merit is believed to have strong ties to the Conservative Party and Prime Minister Stephen Harper’s office.

Bill C-525, part of a larger crackdown on unions, comes on the heels of another Conservative anti-union effort which was defeated in a 49-33 vote in the Senate on June 26. Bill C-377 would have required that unions make public all donations over $5,000 to groups and individuals as well as salaries over $100,000.

Unions would have had to submit 24 different detailed statements of expenses and offer this information on a website. Failure to do so would have lead to a $1,000 fine each day. Sixteen Conservative senators voted against Bill C-377 while six abstained. Critics charged that Bill C-377 was designed to tie unions in red tape and was discriminatory because it did not apply to business.

The forthcoming Conservative Party convention will debate a series of resolutions that would effectively eliminate unions’ financial security. One proposal explicitly calls for U.S.-style “right to work” legislation to allow optional union membership.

The CEP Union and the Canadian Autoworkers have decided to merge and will hold the founding convention f their new union Unifor at the end of August.

Meanwhile talks between the Canadian Telecommunications Workers Union and United Steelworkers are taking place with a view to the TWC joining the Steelworkers later this year.

This entry was posted in International Employment Rights, Publications & Websites. Bookmark the permalink.