Biggest Attack On Workers In Austria For Decades 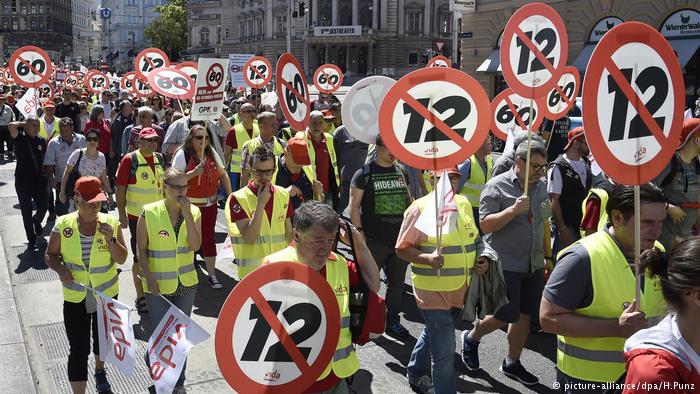 Austrian unions are mobilising against an attempt by the the governing coalition of Ă–VP and FPĂ– to impose longer working hours and flexible workingÂ  having quietly submitted a motion in Parliament on 14th June to extend existing maximum working time regulations. Regular working hours in Austria involve an eight-hour working day (within a 24-hour period) and a 40-hour working week (working hours from Monday to Sunday).

Federal Government has proposed ‘flexible working time’ bringing the working day to 12 hours and introducing a 60-hour work week for many workers as ‘standard’, depending on the employer’s decision without the involvement of works councils and social partnership agreement.

The extension of weekly working time in Austria is possible under specific conditions. On request for more overtime, the work week can go up to 60 hours, and daily working time up to 12 hours provided that it is not more than 24 weeks a year.

If working time is extended on that basis, for eight consecutive weeks, any such overtime shall be inadmissible for the next two weeks. The working time extensions have to be permitted by the Labour Inspectorate and agreed in a plant-level agreement with the works council and the individual employer.

Under the Governmentâ€™s plans, it will now be possible for employers to demand 12 hours a day and 60 hours a week, at any time and without conditions. The overtime payments will be decreased while, in the case of flextime, they will even be completely cut. As these extensions of working time will no longer be regulated in a company-level agreement with the involvement of works councils, benefits for employees such as higher bonuses or extra compensatory free time can no longer be negotiated. The governing parties argue that the individual worker may retain the right to refuse the proposed overtime.

The proposed change constitutes the biggest attack on workers, their health and income for decades and cannot go ahead. IndustriAll Europe stands alongside its Austrian affiliate PRO-GE in refuting the proposal.

â€śThe Austrian act on organising working time is actually a law to protect workers. Now it has been converted by the government into an exploitative law to increase the profits of companies and it was decided upon in a fast-track manner without proper assessment,” Rainer Wimmer, Chairman of industriAll Europe affiliate PRO-GE, explained and continued: “About a hundred years ago, the 8-hour day was introduced. Now it’s supposed to be 12 hours a day in the 21st century. That’s a betrayal of our workers.â€ť

General Secretary of industriAll Europe, Luc Triangle, commented; â€śThe decision of the new Austrian government to impose the extension of working time without prior negotiations with the work Council is a major attack on workersâ€™ and trade unionâ€™ rights. We all know that it is impossible for individual workers to refuse to work overtime without the protection of collective guarantees. This will lead to more mental and physical illness and increase the risk of accident at work.â€ť 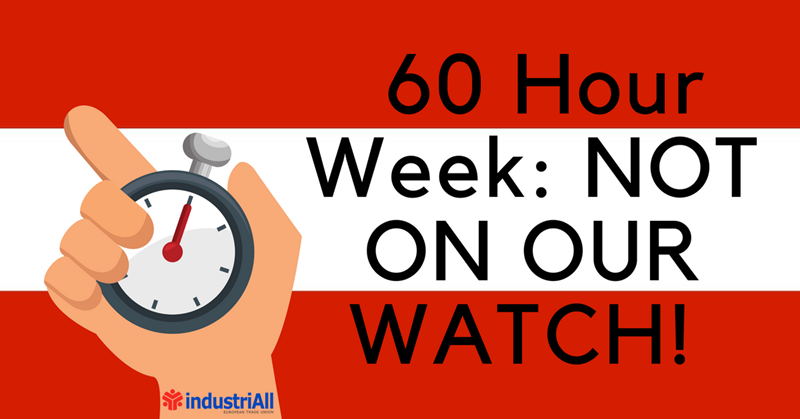 A mobilisation against the planned deterioration of working time is in full swing in Austria. The Austrian Trade Union Federation with all its 7 affiliates (PRO-GE included) took part in an 80,000 strong mass demonstration on 30th June. The information campaign in companies has already started with more than 100 staff meetings nationwide.

Thanks to Marlene Roth and Wolfgang Lemb of IG Metall in Germany.

Martina Schneller writes: Thanks for publishing our article. We are fighting against the implementation of 12 Hours daily working time by our rightwing government in Austria.

The law was adopted on 5th july by the rightwing partiesË‹ majority.

The Austrian Trade Union movement has responede with mass mobilisation, we had a mass demonstration in Vienna at the End of June (See the picture) and 2000 assemblies in companies to inform about the consĂ©quences of the law and get the opinion of our workers to continue the resistance against anti workers legislation in Austria and dismantlement of social insurance and health system in Austria.

Such attacks are unprecedented in Austrian history since 1945.