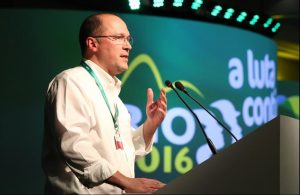 Valter Sanches, General Secretary of IndustriALL the global trade union for manufacturing and energy workers has announced that 35 Bangladeshi unionists and garment workers arrested in December last year have all been released. This follows an international campaign led by IndustriALL Global Union and UNI Global Union against the Bangladesh government‚Äôs crackdown on the labour movement.

A tripartite agreement was reached on 23rd February between IndustriALL Bangladesh Council (IBC), the Ministry of Labour and the Bangladesh Garment Manufacturers and Exporters Association, providing the release of the arrested trade unionists and garment workers. According to the agreement cases against them will be disposed of.

This follows an incredible show of global solidarity, and is an important victory for garment workers in Bangladesh, sending a strong message to the country’s industry to enter into a constructive dialogue with the trade unions.

IndustriALL says they were also successful in putting pressure on brands in the context of the Global Framework Agreements with them.

The issue that sparked the crackdown on unions at the end of last year still remains. We will continue to support the fight for higher wages and will closely monitor the situation until all charges are dropped.