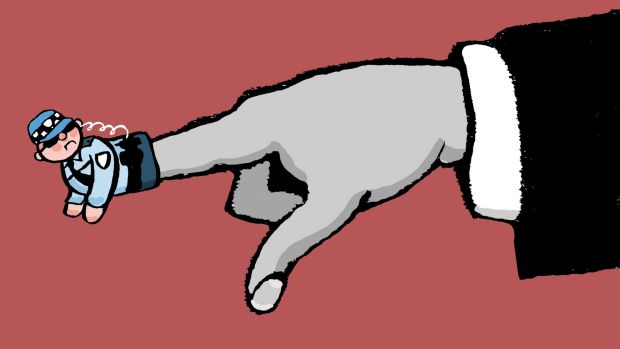 From Barry Camfield in Australia

The Australian Workers‚Äô Union (AWU) is the Australia‚Äôs oldest and largest blue-collar trade union representing over 100,000 working men and women and their families.

On Tuesday 24th October 2017, the offices of the AWU were raided by the Australian Federal Police. The police were acting on the instructions of a new anti-union organisation set up in May 2017 by the right wing Liberal Govenment under Malcolm Turnbull, the ‚ÄėRegistered Organisations Commission‚Äô (ROC). The ROC was set up with a single purpose, to smear and attack the trade union movement, and through that to smear and attack Bill Shorten, Labour‚Äôs leader.

A real and vicious witch hunt against unions and the Govenmentt‚Äôs political opponents has been launched by the Liberal (Tory) Government. The raids on union offices in Sydney and Melbourne has been described as clearly a political act.

The raid upon the AWU sought to seize documents relating to an investigation into the union‚Äôs donations. The ROC says it is looking into whether donations of $100,000 made to an NGO ‚ÄėGetUp Limited‚Äô during the financial year ending 2006 were approved under the AWU rules. The AWU say this:

‚ÄúThe AWU has always provided support to different campaigning and community organisations. We were proud to be early supporters of the formation of GetUp! All donations are processed and disclosed as appropriate, and that’s certainly the case here. The support we gave to GetUp! was endorsed by national executive at the time.‚ÄĚ

One of two payments of $50,000 was authorised by the current leader of the Labor Party, Bill Shorten, then Secretary of the AWU. Here is the connection to the political attack on the Labor Party, from an authorised donation made 10 years previously by an independent trade union. ‚ÄúWe made declarations that we had made donations to it (GetUp) and yet, fast forward 10 years and we had 32 AFP officers raiding our offices yesterday‚ÄĚ

ROC is also investigating a $25,000 payment to Bill Shorten‚Äôs election campaign back in 2007, and other donations to Labor campaigns at the time.

Sally McManus, General Secretary of the ACTU said: ‚ÄúThe ACTU condemns the nakedly political use of the AFP in today‚Äôs action against working people and their representatives. Using the police in such a way, while refusing to do anything to prevent money laundering by terrorists and drug dealers by the big banks, demonstrates the government‚Äôs appalling priorities. This is the sort of action you would expect to see by an authoritarian dictator, and it has no place in Australia. All Australians should be disgusted. Malcolm Turnbull‚Äôs grubby political tactics and abuse of power to attack those who oppose his anti-worker policies is a new low.‚ÄĚ

Sharan Burrow, ITUC General Secretary (which represents 181 million workers in 163 countries with 340 national affiliates) said: ‚ÄúMedia outlets were given advance warning of the raids, presumably by the government, to maximise publicity. The raids are apparently about allegations that the union gave financial support to a progressive community group ‚ÄėGetUp‚Äô along with political candidates more than a decade ago. This is an abuse of power by a government that is behind in the polls and is turning to union bashing to try to bolster its flagging fortunes. We are used to seeing these kind of tactics in dictatorships, not democracies‚ÄĚ.

¬†Luke Hilakari, Secretary of the Victorian Trades Hall Council said: ‚ÄúMichaelia Cash (the Liberal Govenment¬† Minister for Employment) told¬† Parliament five times that neither she or her office had any idea about the raids that were about to take place at AWU offices earlier this week. But then.. she admitted her staff had leaked to the media. Make no mistake, these raids were staged. ‚Ä¶Trying his best to divide us, Malcolm Turnbull is actually bringing us all together. Today and every day, we stand shoulder to shoulder with Sally McManus who is leading our fight and with the AWU members under attack.

Michaelia Cash, along with the Liberal Party asked for an investigation into Bill Shorten and that‚Äôs what the ROC has delivered, complete with police and media crews who had been tipped off ahead of time.

The raid represents the misuse and abuse of police powers for political ends. This is not about criminal behaviour, this is not about whether the AWU made donations to GetUp or Labor, these donations were never a secret and were well understood by everyone in the union at the time. No, the ROC is investigating whether the correct paperwork was filed 10 years ago! This is a smear campaign by a right wing Government, against unions and its political opposition – pure and simple.

The AWU have said this ‚ÄúFor 131 years conservative governments have tried to destroy the collective voice of working people and they have failed every time. You can rest assured that we won‚Äôt be intimidated and we won‚Äôt back down in the face of government threats‚ÄĚ.