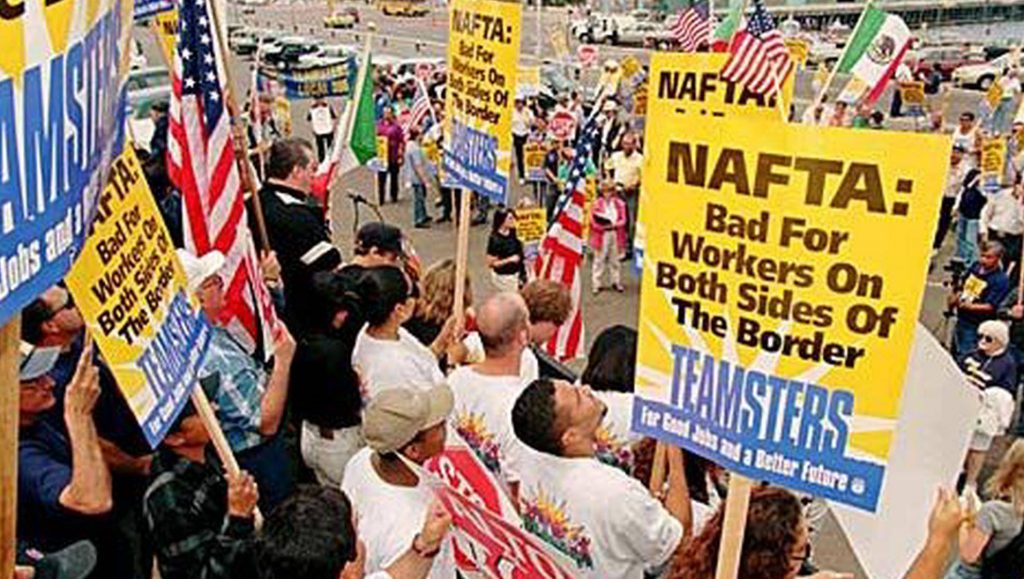 Following Donald Trump‚Äôs election in the USA the AFL-CIO has released a blueprint for how to rewrite NAFTA to benefit working families. This is in response to Trump‚Äôs many campaign speeches in which he said that the North American Free Trade Agreement would be ‚Äėripped up‚Äô and re-negotiated to benefit US manufacturing, create jobs and working people.

There is much scepticism that his billionaire buddies will let him do that.

But the AFL-CIO said there was much needed discussion on the impact of corporate trade deals on the manufacturing sector and on working class communities.

Their outline below puts forward solutions that should garner ‚Äėbipartisan support if lawmakers are truly serious about realigning our trade policies to help workers‚Äô:

Over the last year the country has shown that we want a different direction on trade. This movement has been largely driven by workers. As we approach the inauguration of a new president, it is important that workers‚Äô perspective lead the debate. In the coming months, the AFL-CIO will highlight how NAFTA should be rewritten.

The AFL-CIO has long supported rewriting the rules of NAFTA to provide more equitable outcomes for working families. To date, the biggest beneficiaries of NAFTA have been multinational corporations, which have gained by destroying middle class jobs in the U.S. and Canada and replacing them with exploitive, sweatshop jobs in Mexico. It doesn‚Äôt have to be this way. With different rules, NAFTA could become a tool to raise wages and working conditions in all three North American countries, rather than to lower them.

NAFTA established a private justice system for foreign investors, thereby prioritizing corporate rights over citizens‚Äô rights, giving corporations even more influence over our economy than they already have. This private justice system, known as investor-state dispute settlement, or ISDS, allows foreign investors to challenge local, state and federal laws before private panels of corporate lawyers. Although these lawyers are not accountable to the public, they are empowered to decide cases and award vast sums of taxpayer money to foreign businesses. Under NAFTA, these panels have awarded millions of dollars to corporations when local and state governments exercise their jurisdictional power to deny things like municipal building permits for toxic waste processing facilities. ISDS gives foreign investors enormous leverage to sway public policies in their favour. Scrapping the entire system would help level the playing field for small domestic producers and their employees.

The NAFTA labour and environment agreements were not designed to effectively raise standards for workers or to ensure clean air and water. Instead, they were hastily patched together to quiet NAFTA‚Äôs critics. These agreements should be scrapped and replaced with provisions that effectively and robustly protect international labour and environmental standards.¬† Violators should be subject to trade sanctions when necessary‚ÄĒso that we stop the race to the bottom that has resulted from NAFTA. Without stronger provisions environmental abuses and worker exploitation will continue unchecked.

Within months after NAFTA‚Äôs approval by Congress, Mexico devalued the peso, wiping out overnight potential gains from NAFTA‚Äôs tariff reductions. This devaluation made imports from Mexico far cheaper than they otherwise would have been and priced many U.S. exports out of reach of average Mexican consumers. Countries should not use currency policies to gain trade advantages‚ÄĒsomething China, Japan and others have done for many years. All U.S. trade agreements, including NAFTA, should be upgraded to create binding rules, subject to trade sanctions, to prevent such game playing.

NAFTA‚Äôs rules require that automobiles be 62.5% ‚Äúmade in North America‚ÄĚ to qualify for duty-free treatment under NAFTA. Even though 62.5% seems high compared to the TPP‚Äôs inadequate 45%, it still allows for nearly 40% of a car to be made in China, Thailand or elsewhere. The auto rule of origin should be upgraded to eliminate loopholes (through products ‚Äúdeemed originating‚ÄĚ in North America) and to provide additional incentives to produce in North America. This, combined with improved labour standards will help create a more robust labour market and help North American workers gain from trade.

NAFTA contains provisions that require the U.S. government to treat Canadian and Mexican goods and services as ‚ÄúAmerican‚ÄĚ for many purchasing decisions, including purchases by the Departments of Commerce, Defence, Education, Veterans Affairs and Transportation. This means that efforts to create jobs for America‚Äôs working families by investing in infrastructure or other projects, including after the great financial crisis of 2008, could be ineffective. This entire chapter should be deleted.

NAFTA allows for a final review of a domestic antidumping or countervailing duty case by a bi-national panel instead of by a competent domestic court. This rule, omitted from subsequent trade deals, has hampered trade enforcement, hurting U.S. firms and their employees. It should be improved or omitted.